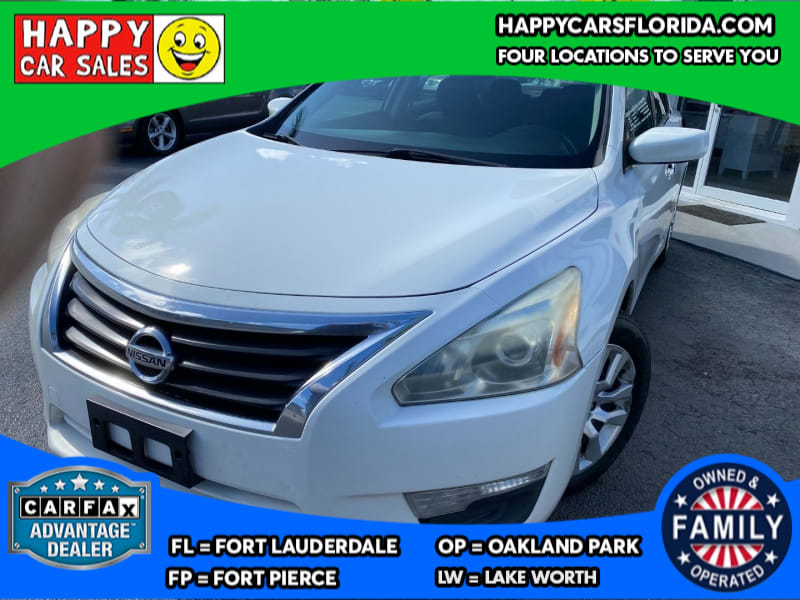 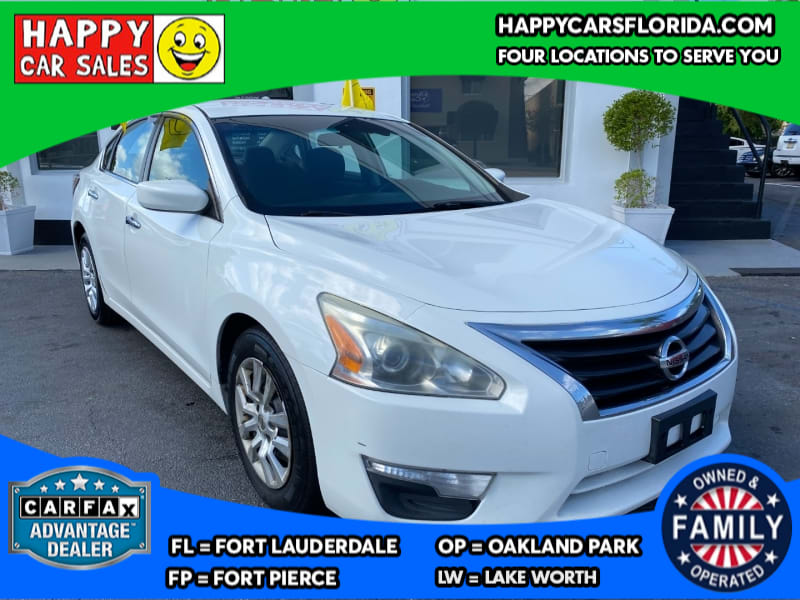 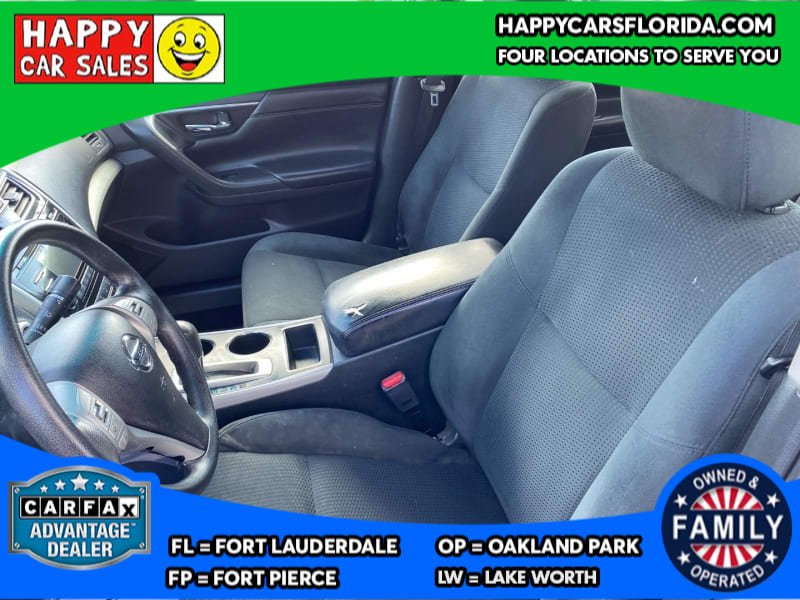 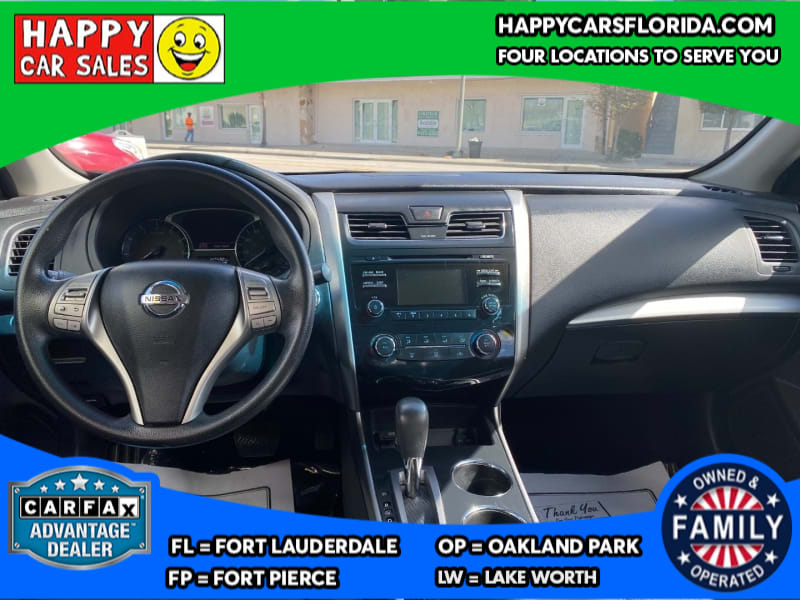 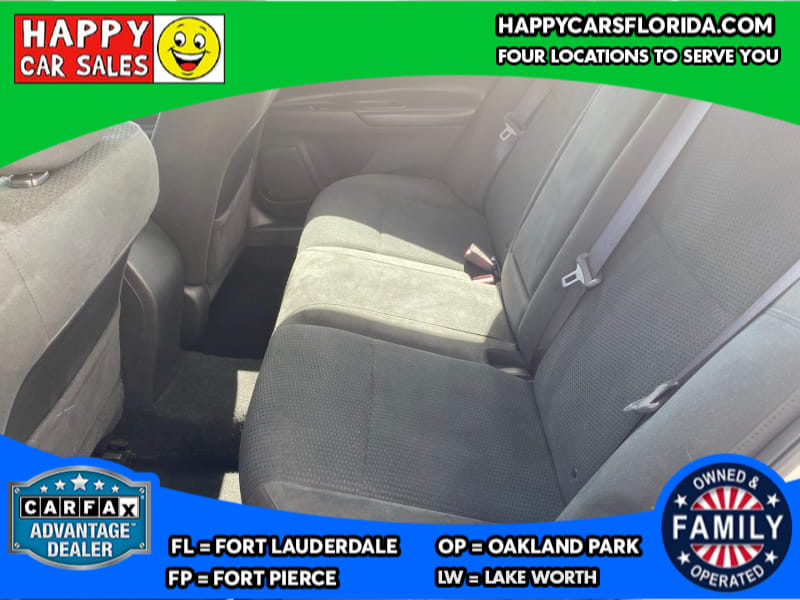 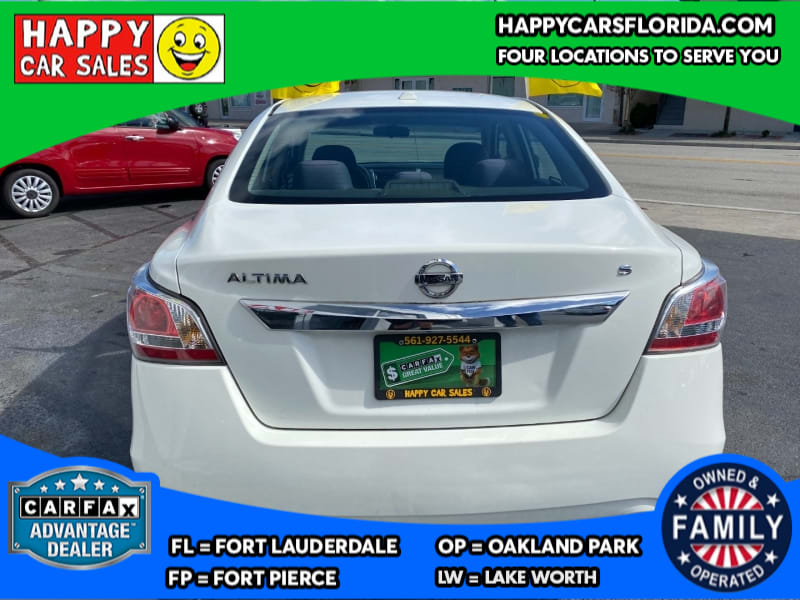 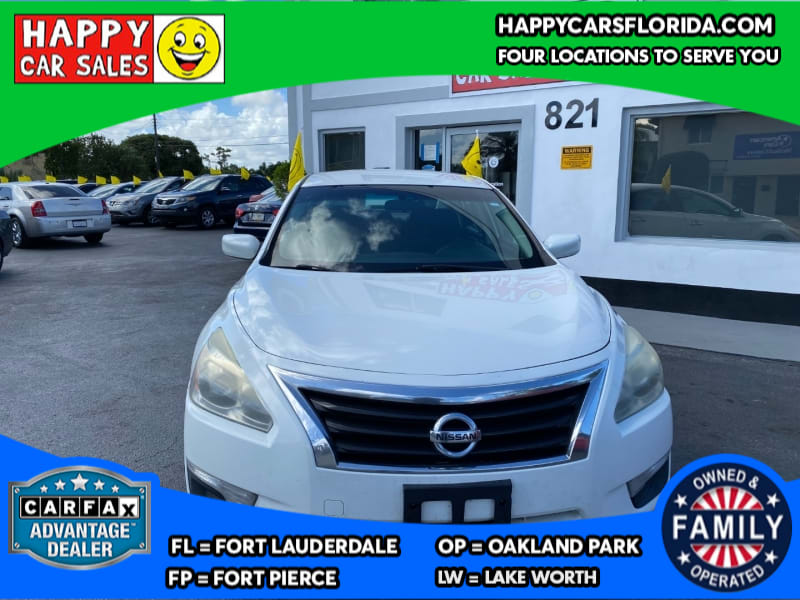 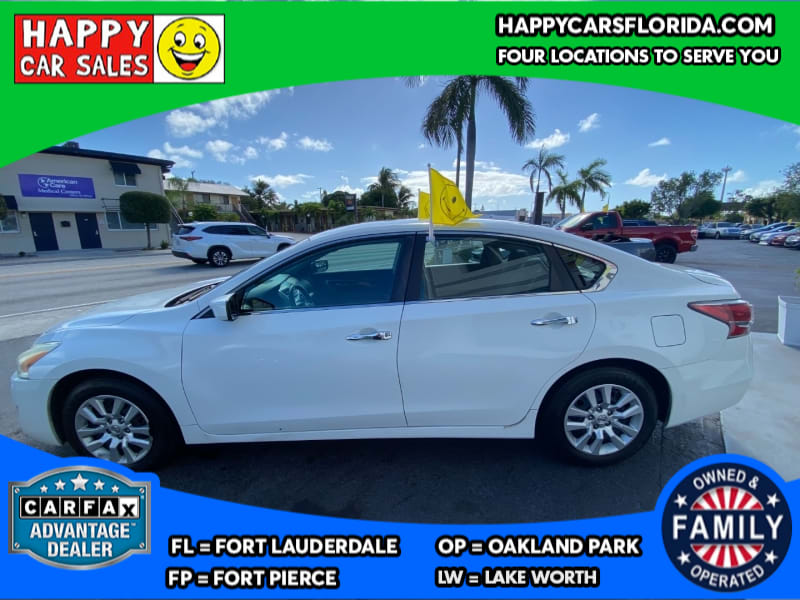 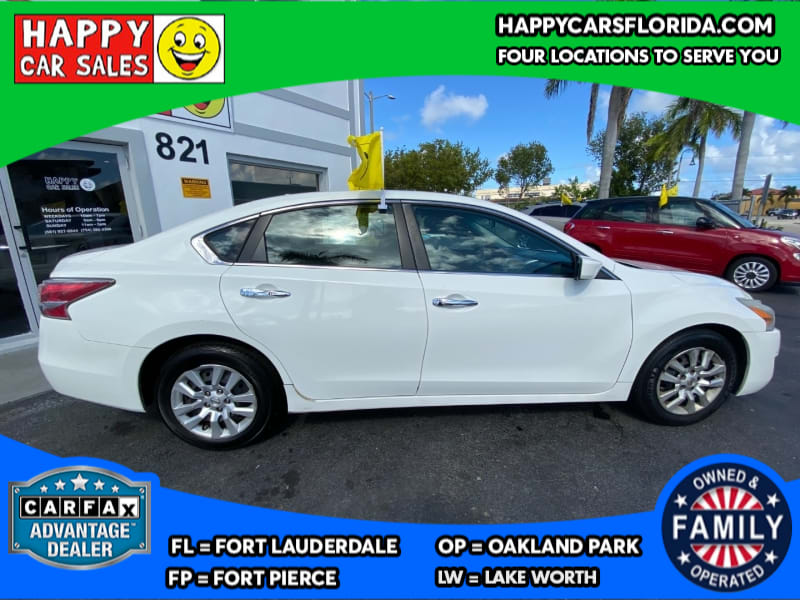 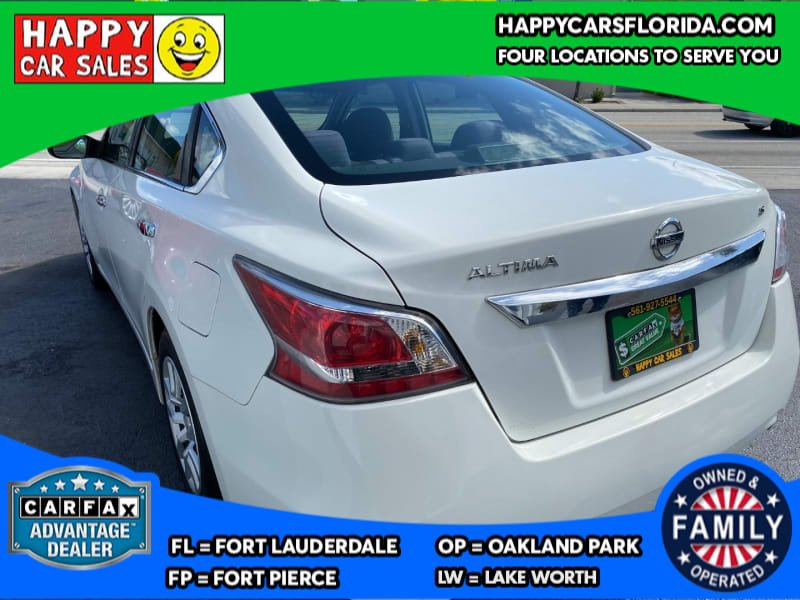 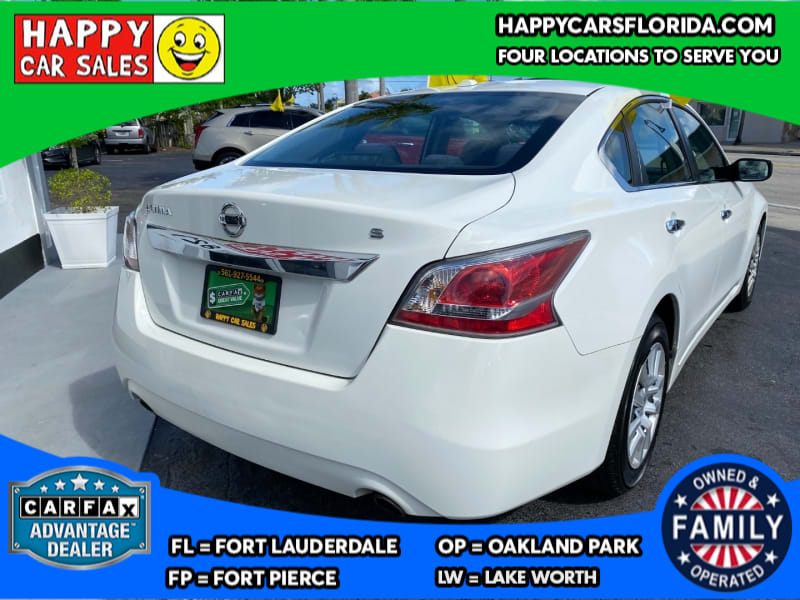 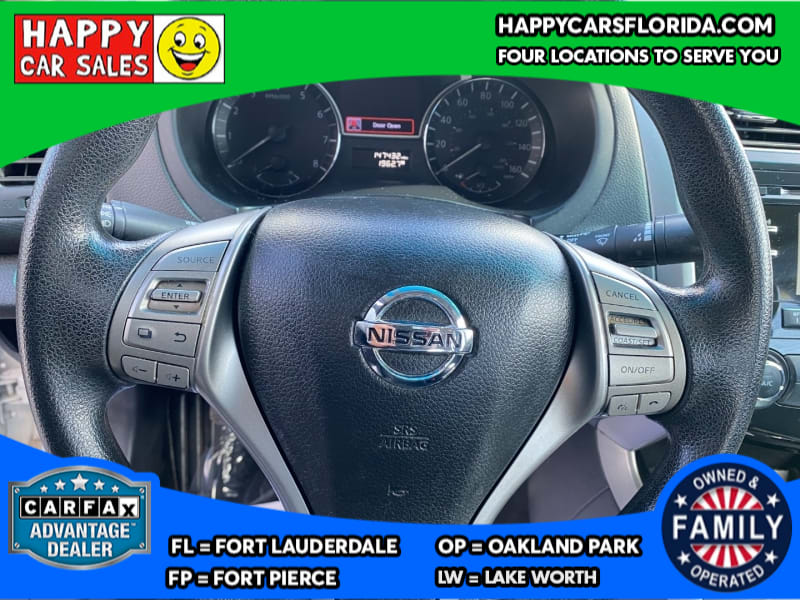 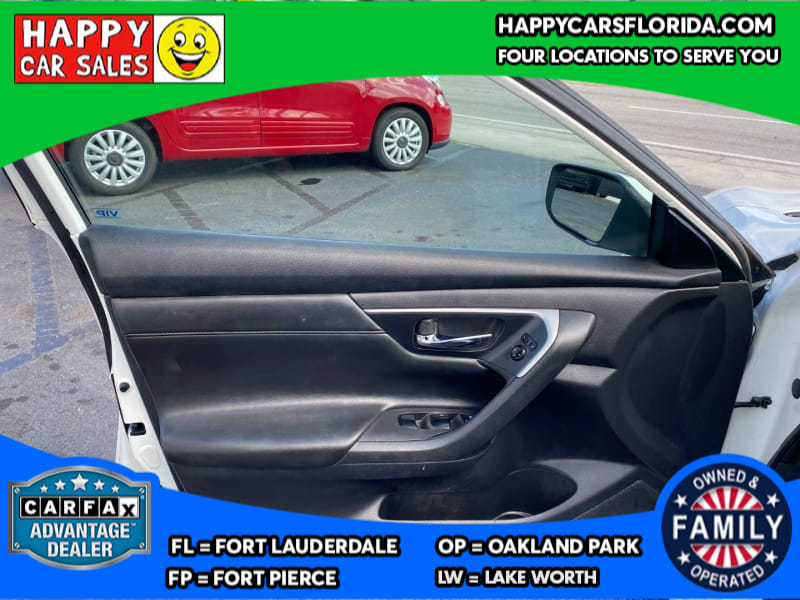 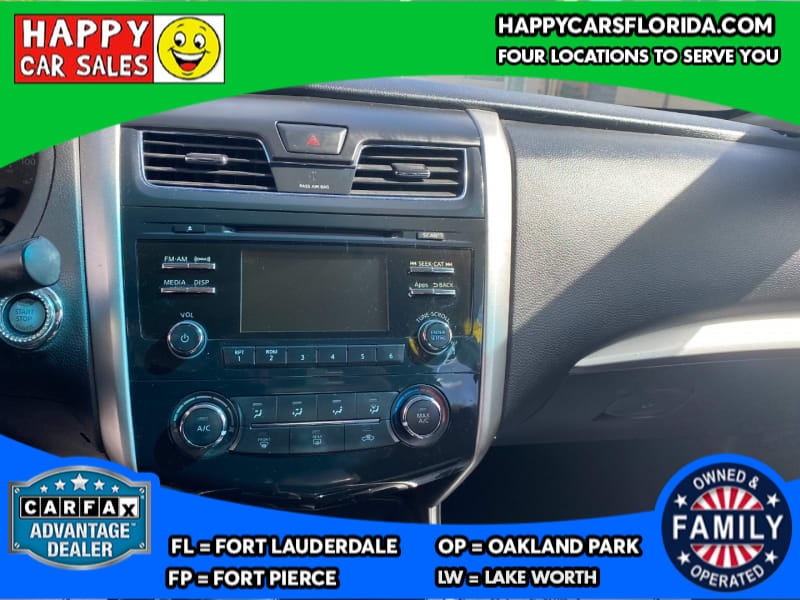 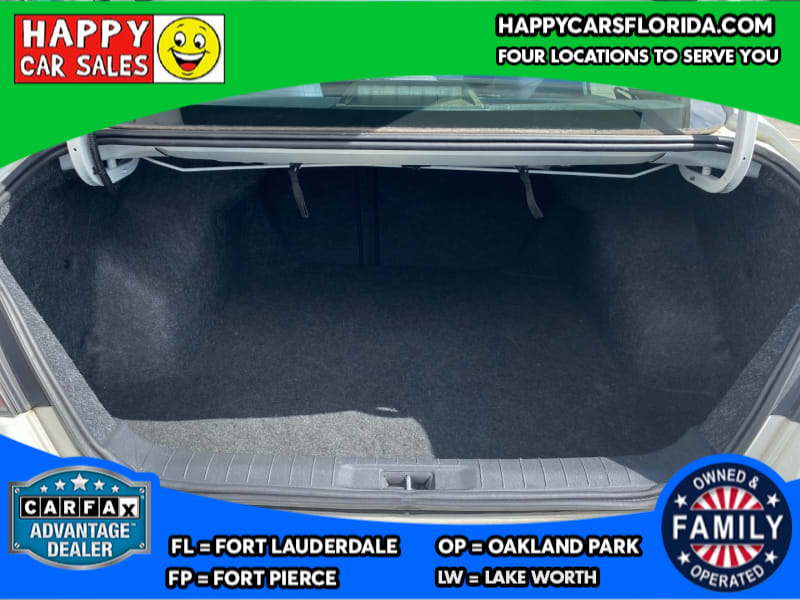 Prices for the 2015 Nissan Altima sedan are right in line with the competition. The base model starts reasonably enough at the $23,000 mark, a little more than a VW Passat or Hyundai Sonata, but right there with the Toyota Camry, Ford Fusion and Chevy Malibu. Move up to the loaded SL with a V6, and you're looking at about $32,000. To make your best deal on a 2015 Altima, be sure to check the Kelley Blue Book Fair Purchase Price which shows what others in your area are paying for their cars. The Altima's resale value should also be mid-pack, a little less than perennial midsize-sedan favorites Toyota Camry and Honda Accord, but better than the rest in this highly competitive class.Which Model is Right for Me?2015 Nissan Altima 2.52015 Nissan Altima 2.52.5-liter 4-cylinder engine16-inch steel wheelsCloth seatsAM/FM/CD with 4 speakersPower windows2015 Nissan Altima 2.5 SCruise controlOptional power driver's seatAM/FM/CD with 6 speakersOptional 5-inch audio displayOptional USB port2015 Nissan Altima 2.5 SV17-inch alloy wheelsLeather-wrapped steering wheelFog lightsPower driver's seat5-inch audio display2015 Nissan Altima 2.5 SLHeated steering wheelPower, leather-trimmed front seatsBose audio systemRear heating/cooling ventsSideview mirrors with integrated LED turn signals2015 Nissan Altima 3.5 SL3.5-liter V6 engine18-inch alloy wheels7-inch color displayLane-departure and blind-spot warningsPower moonroofDriving The Used 2015 Nissan AltimaThe 2015 Nissan Altima's key selling point may be its driving dynamics. Without giving up any of its mainstream family-car duties, this midsize sedan nonetheless manages to impart a measure of driving fun that's uncommon in the segment. Its multilink independent suspension and best-in-class continuously variable automatic transmission will convince you that Nissan engineers are truthful when they say they benchmarked premium sedans like the Audi A4 and BMW 3 Series. While a bit stiff on the harshest surfaces, the Nissan Altima won't beat you up around town while remaining nimble enough on mountain roads to be, dare we say, fun. The powerful 3.5-liter V6 is the obvious enthusiast choice, but the 2.5-liter 4-cylinder is more than adequate for light loads and level roads. The unique multifunction rearview camera performed its lookout jobs well, and the NASA-inspired seats proved as fatigue-reducing as claimed.Interior ComfortNo matter how much you like the 2015 Nissan Altima's interior layout, or its plentiful high-end and soft-touch materials, or the easy-to-use center stack, it's the NASA-inspired zero gravity front bucket seats that you'll love the most. They're designed to approach the relaxed neutral posture the human body assumes in a weightless environment. While we didn't book time on Virgin Galactic to test the claim, we can say that they're surprisingly comfortable for the long haul, especially for midsize-sedan class cars. The rear seat offers very good legroom, and the huge trunk can swallow just about anything.Exterior StylingThe 2015 Nissan Altima strikes a difficult balance, managing to look stylish, but without running the risk of getting prematurely dated. The classic proportions help: The Altima is wide, giving it an aggressive stance, and the body's long lines give it character without going overboard, like the Hyundai Sonata. The result is a midsize sedan that maybe isn't quite as pretty as a Ford Fusion, Mazda6, or even a Chevy Malibu, but one that definitely looks more distinctive than a Toyota Camry or Volkswagen Passat.Favorite FeaturesEASY FILL TIRE ALERTFalling squarely into the why-didn't-anybody-think-of-this-before category is the Nissan Altima's Easy Fill Tire Alert. Using the tire pressure monitoring system â standard on all cars since 2007 â the Altima's horn honks and the lights flash to let you know you've added enough air to the tires.NISSANCONNECTThere's no question we love our handheld gadgets, and manufacturers are scrambling to bring mobile connectivity to the driver's seat. NissanConnect lets Altima SV and SL owners use things like Facebook. To avoid distractions, the keyboard sensibly locks out when you're driving.Standard FeaturesThe base 2015 Nissan Altima 2.5 comes standard with a 6-way manual driver's seat and a 4-way front passenger seat, plus a 60/40-split/folding rear bench seat, power windows and doorlocks, a tilt/telescoping steering wheel with touch controls, remote keyless entry with a pushbutton ignition, NissanConnect Bluetooth hands-free connectivity, and a 4.0-inch color customizable Advanced Driver Assist display. New to the standard list for 2015 SV models is the NissanConnect app suite, along with a new 8-way power driver's seat. Top-line 2.5 SL and 3.5 SL sedans get loaded with leather, premium trim, automatic climate control, and other luxuries.Factory OptionsNissan bundles most of its major features with specific models, leaving few standalone options. Among them is a Convenience Package for SV models, which adds a moonroof, rear air conditioning vents, and a one-touch passenger side window, among other things. A Technology package for the SV and SL models adds navigation to the touch screen. Altima S models can be augmented with a Display Audio Package that adds a 5-inch color display, and a Sport Value package that adds a remote engine start, 16-inch aluminum-alloy wheels, and a trunk-mounted spoiler.Engine & TransmissionWhile many manufacturers are offering different 4-cylinder engines, hybrids, and diesels, the 2015 Nissan Altima sedan goes the traditional route by offering a base 4-cylinder and a V6 as the up engine. The 2.5-liter four is designed for lighter weight and higher efficiency, while the 3.5-liter V6 offers improved fuel economy, adding one mpg to the combined and highway scores. Both drive the Altima's front wheels through the only gearbox offered, Nissan's next-generation Xtronic continuously variable automatic transmission (CVT). Not everyone loves a CVT, which drives engine revs ahead of vehicle speed during strong acceleration, but this one accounts for both the 4-cylinder and the V6's impressive fuel economy, and it comes with fixed-ratio-simulating manual shift paddles on up-level Altima models.2.5-liter inline-4 (2.5, 2.5 S, 2.5 SL and 2.5 SV)182 horsepower 6,000 rpm180 lb-ft of torque 4,000 rpmEPA city/highway fuel economy: 27/38 mpg3.5-liter V6 (3.5 S, 3.5 SV and 3.5 SL)270 horsepower 6,000 rpm258 lb-ft of torque 4,400 rpmEPA city/highway fuel economy: 22/32 mpg

You have no vehicle saved.